If you’ve been following the news you probably are aware that the number of people that test positive for COVID-19 is rapidly rising. As most people that know a bit about historical pandemics have warned about. The ‘second wave’ is a fairly typical thing with respiratory diseases because during the summer month these are usually at a disadvantage. People are at the peak of their resistance, more outdoors and the moisture conditions in the air do not favor transmission. UV light tends to damage the genetic material of viruses, which are particularly sensitive to that. And so in the summer the number of virus infection cases drops and the number of dead and hospitalized people will also go down.

But that’s not reason to become complacent and doing so would be a very grave mistake. Let me explain why. First of all, the virus is now well established. When in January of this year it had to start from near zero it is now very well established in our population, there are more than a million people that are contagious right now, compared to a handful in January. This head start means that the ramp-up will be extremely quick. Just how quick we do not know but chances are that in three weeks time we will be looking at a sitution much worse than it is today. There is already some evidence for this. The virus also has a good 6 to 7 months ahead of it to do its work instead of only 3 for most of the world in January. That translates into many more chances of infecting people. The daily number of dead is low right now because the dead typically lag the infections by anywhere from two to six weeks, though it has already been shown that COVID-19 can kill rapidly it does not necessarily do that, and as ICU capacity is still able to absorb the gravely ill it will reduce the number of dead considerably. Once that is exceeded though it will flip instantly from being just ‘bad’ to very serious indeed.

And finally, and most importantly: people are sick and tired of all the anti COVID-19 measures and are more than happy to stick their heads in the sand and wish for it all to go away. The political arena is - again - filled with talk about whether or not we should choose for our health or the economy. Let me make something very plain here: it is not a choice between the health on the one side and the economy on the other. COVID-19 will continue to hurt us economically until there is a vaccin or we get our act together and decide to deal with it frontally. The damage to our health is the part that is - in principle - optional, or at least, a good part of it.

But you can’t choose to have great health and a good economy. You can’t choose to have a good economy and have a lot of people die because the disease will have its financial impact either way. So the whole idea that there is a choice here is abject nonsense, we are going to hit some pretty hard times in the next couple of months and come April next year there will be a different world. Unfortunately, only very few statesmen and women today are good at managing a crisis. They are excellent captains for seeing the boat through many years of fair weather. They do not know - nor should we expect of them, after all they’ve had little or no possibility to train for this - how to manage a crisis of these proportions. Their concern for their image, popularity and chances for re-election are more of a concern than simply doing what it takes to get this behind us.

There are some exceptions. New Zealand, Finland, Western Australia and the Baltics still stand out as examples of how we could have dealt with this. Unfortunately, those are a rarity and the fact that these countries internal mobility and external connectivity to the rest of the world are relatively low made it an easier problem for them to deal with. But regardless of the special circumstances, they did what they had to and they did so when it mattered.

We are now at a crucial point in time: any delay in strong countermeasures today will be reflected in the total body count at the end of this ride, and it is not just people dying that we should be worried about. COVID-19 has a fair chance of affecting you for much longer than that you are actually ill if you have a severe cases of it. And the really long term effects (as in decade+) won’t be known for many years so we are all guessing about what they could be, but if there are any they likely will not be good.

Reacting decisively, forcefully and without delay could make the difference between a disaster of epic proportions or something that we will barely remember in twenty years. Unfortuntely our current crop of politicians is more concerned with their image and chances for re-election than they are with the simple truth of the matter: this crisis is not going to be solved by talking about it or slow-walking it. Right now COVID-19 has shown to have the potential to kill one in 850 inhabitants (Belgium as the current worst sample case), and by the time this is over than number will likely be much higher. Fortunately almost all countries in the world are doing better than that today. The next six months will most likely be much worse than the preceding six months. Once - if, hopefully - we get to the point where the ICUs will be overrun again this could go very fast beyond our ability to control. If we fail to do that the body count will dwarf what has happened so far. I’m not saying that lightly.

Additional complications in the form of ‘covidiots’ (people who deny the virus is real, who will encourage others to take risks, who take part in large scale demonstrations and who in general seem to live in denial) are going to be a much bigger problem than they have been so far. Fringe political groups have found that by playing the ‘they are out to get us’ card that they are able to command much more attention than they were able to do so far with their more limited agendas (such as: fomenting racial hate and general subversion), as a result their numbers are swelling and people in larger groups are somehow always more stupid than each of them individually leading to some very predictable results. COVID-19 has been successfully hijacked by these groups who ultimately just want to use it to further their agendas. Be smart and realize that if you find yourself on the same side of some argument as the fringe groups that you are most likely being taken for a ride.

The same goes for the people who are systemically downplaying the risk because of ‘the economy’, as though the economy works in some kind of idealized vacuum instead of that we are all part of it. Then there are those who would like to emphasize that the economy being bad by itself causes increased mortality due to suicides and other side-effects. This is true, but not on a magnitude that comes even close to the primary effects of COVID-19, forget about the comparison if you include the secondary effects (for instance: overworked health care personnel and people that do not die right away but who are affected for a long time, possibly the rest of their lives). All these ‘reasonable voices’ do nothing to minimize the actual effect and could very well cause people who would otherwise take this more serious to get ill or lose their lives.

All in all we have a rough time ahead of us. The perfect storm, you could say. Within a six month period we are going to face the worst health crisis in the last century or so, a very tumultuous election in the United States (where, unfortunately COVID-19 is now a political football), Brexit (the exit of the UK from the European Union, in a nutshell a bunch of small fish trying to increase their apparent size by reducing the size of the pond, hurting their country and their economy in the process) and higher and higher tensions in Belarus, which could very easily cause a repeat performance of what happened in Ukraine.

“May you live in interesting times” never was a blessing, it always was a curse. We are living - for better or for worse - in very interesting times. Just how interesting we are to a very large extent in control of ourselves. Even if our governments fail us in their duty to decisively put an end to this we all can contribute. If you’re doing to make the argument that ‘the economy’ is more important than a couple of million lives: what if it is your life? Your parents’ life or your childs life? What if the economy will go down the drain anyway? If you don’t know then at least don’t make life harder for those that do take this serious and that are not going to stand idly by.

Keep in mind that this virus does not have legs to walk on or wings to fly with. We provide it, we hand carry it from one infected person to the next and we all contribute to this unless we actively work against that.

Hopefully enough smart people taking this serious will be able to diminish the impact to the point that those that wish to pretend it doesn’t exist are more than balanced out. Other good news is that treatment protocols have advanced significantly and your chances of survival are now better than they were in March or April if you should contract the disease and develop a severe case requiring hospitalization or even a stay in the ICU. Still, you would not wish this virus on your worst enemy, and if you can avoid it then please do so.

And finally, if you are a COVID-19 denier or general complot theory adherent, or still think this is just another flu, I’d like you to take careful note of the following handy and short NHS approved guide which has world-wide applicability (by @gammonmag): 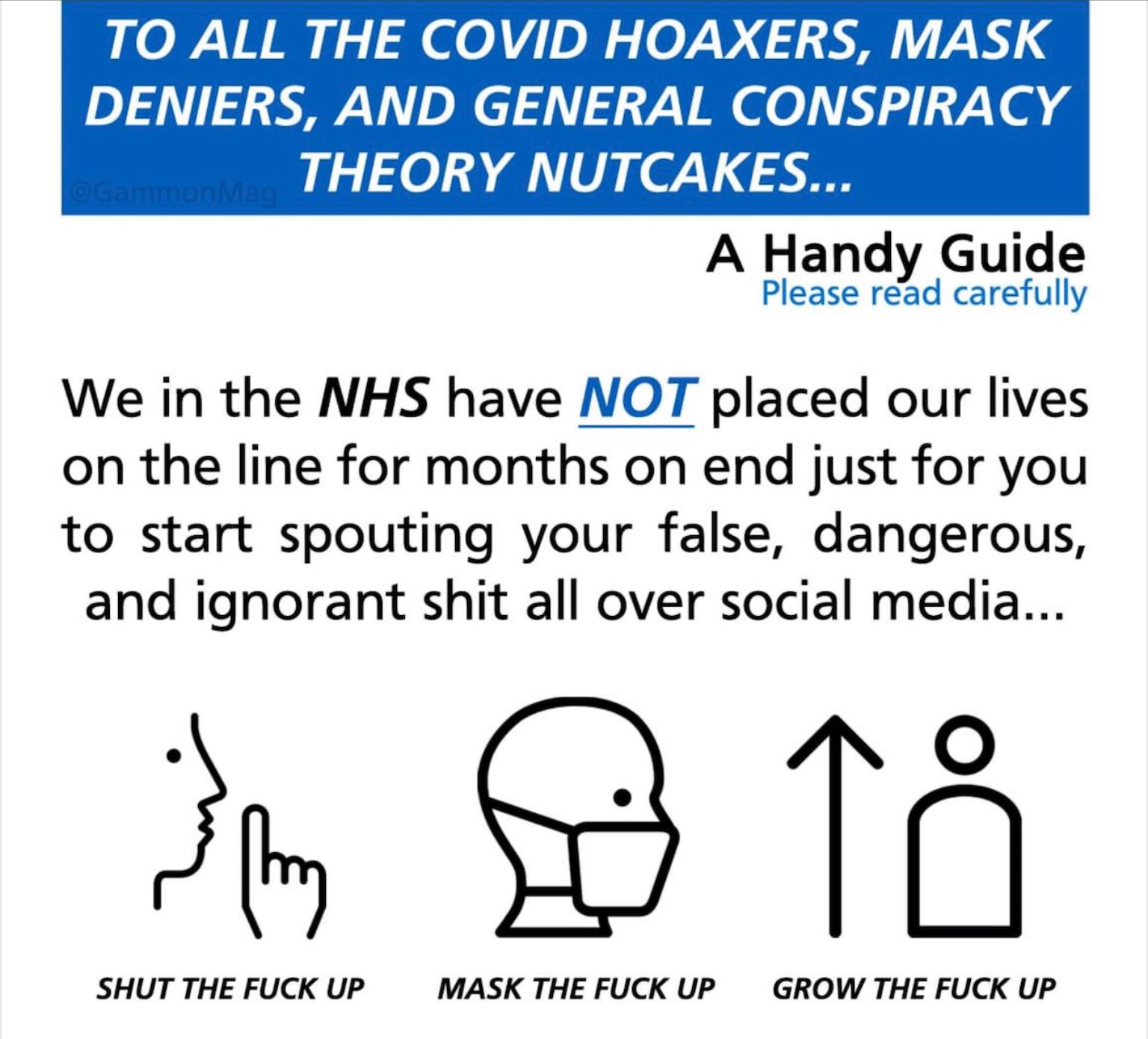