I love cycling. Sometimes I think I love it just a little bit too much. Such as the day two years ago that I took my Zephyr Lowracer for a spin and ended up in the hospital with my right leg broken in way too many pieces. It was a pretty harsh experience, one second you’re fine, the next you are flying through the air (speedbumps work on bicycles too…) and before I’d landed I already realized this was going to be a bad one. No disappointment on that front, Basically my foot was wrenched from my leg, the right leg dropped from the pedal, slowing it down and so then the bike with me on it went over that. Not a good sound, to hear your bones snapping. Before the ambulance arrived I’d set my foot myself (don’t try this at home). The ambulance guys were a bit surprised that they were called in for a broken leg because it all looked pretty good to them.

After a very gingerly ride to the hospital with an air splint around the whole affair I ended up being operated on for a really long time. Thanks to the wonders of modern medicine, the super nice nurses, caretakers, doctors and surgeons of the hospital in Hilversum I was out of the hospital in two days with about half a Home-depot hardware department in my leg. Steel plates and lots of screws. Now to heal. That took a long time, in fact it is work in progress. After a few weeks of doing nothing except hopping around on one foot and using crutches I took to cycling again. Very very carefully. This worked but it didn’t take me long to realize that I was scared out of my wits of falling again. One of the problems of being a business owner is that you really can’t afford downtime. We didn’t miss a single job because of my little accident but that was mostly because of fantastic timing, it happened in the middle of the holiday season. By the time the first customers returned I was on crutches. Another week later I was walking - slowly. But I did notice that recovery went rather slower than I wanted. So more cycling, but no more room for accidents.

After a few weeks of this I realized that it was going well as long as I could keep it up, every day at least an hour. But if I slacked off for work, weather or other reasons it was back to square #1 with everything stiff and painful.

A couple of weeks ago I finally had enough of this and decided to do something about it rather than to be frustrated and I started to research indoor options. Many of them are way too expensive and seem to be mostly designed to look good to justify their price. I didn’t care much for that. Some more searching on the various forums and I realized I needed a hybrid between a bike and a hometrainer. For a bit I messed around with duct-tape-and-glue solutions and then the other day an associate at one of the companies I work for (thanks Reinder!) mentioned the Tacx brand again, I’d already run into them before. So I got one of those, the simple ones are pretty cheap, and serve my needs well.

One of the things I noticed right away after getting it all to work was that it was extremely boring. No road to watch, no goal to strive for, no weather, just a blank wall. Listening to music helps, but it is only so much of a motivator. So what I ended up doing is this: I ‘trainified’ VLC.

Here is how it works: You want to watch a movie? Fine, but you’ll have to work for it. A minimum speed is set, say 30 Kph, and only when you are above that speed does the movie run normally. There is a movie called ‘speed’ around that theme, but there things blow up if you drop below the minimum speed. That wouldn’t go down well with the neighbors so instead what happens is that as soon as you drop below the minimum speed the movie slows down, and the sound with it. So the only way to really watch the movie is to keep going, otherwise you start missing bits. For people with perfect pitch: watch music videos, you will be extremely motivated ;)

VLC has some excellent features for this, for one you can switch off audio stretching, which means the audio changes in pitch as soon as you slow down, for another there is a remote control feature that allows you to specificy a ‘playback’ rate as a floating point value. A little transmitter on the bicycle counts wheel revolutions and a python script then converts that data to the rate which is sent on to VLC. That’s all, and it works pretty good. A two hour movie is a pretty good exercise this way.

Here are some pictures, this is an older Koga-Miyata racing bike, bought from the local bicycle shop for a song. The rear wheel has a special tire on it that is more wear resistant against this kind of use than a normal wheel would be. 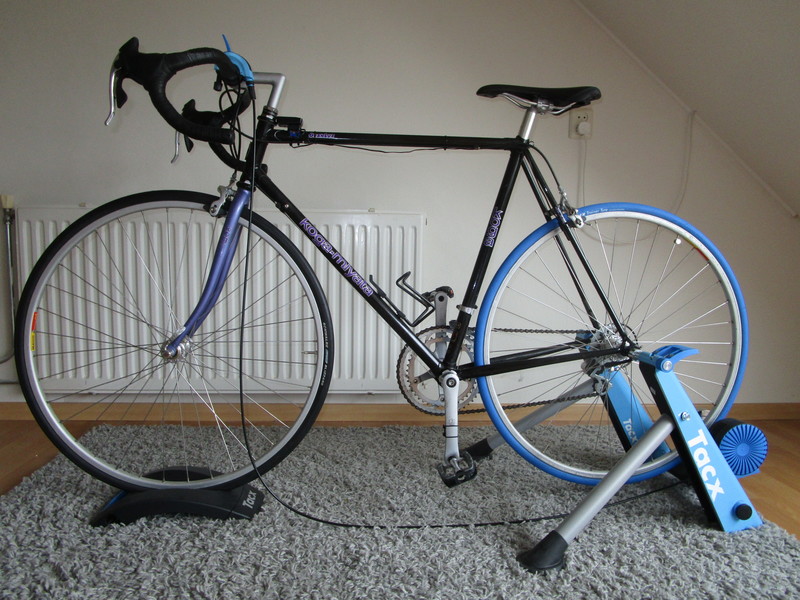 This is the speed sensor in the rear wheel: 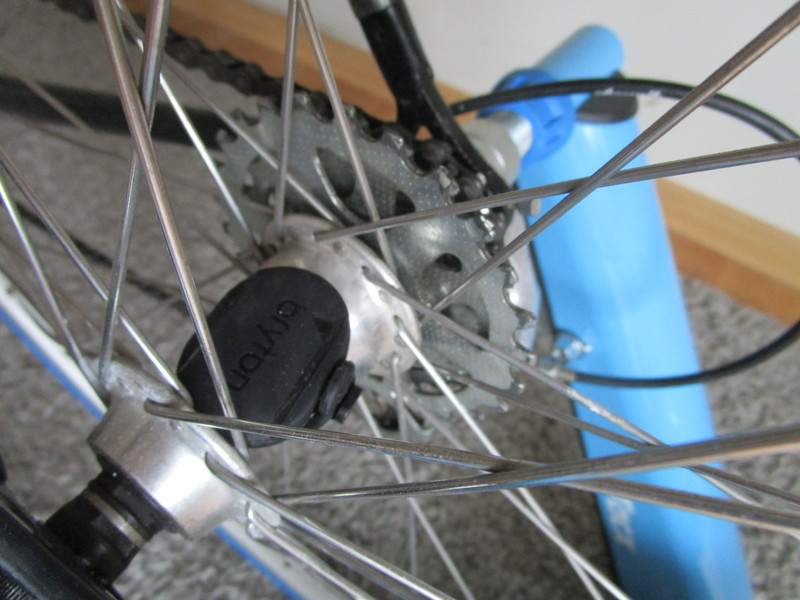 And this is the ANT+ usb radio that connects to a USB extension cable to get it out of the zone where the computer interferes with reception: 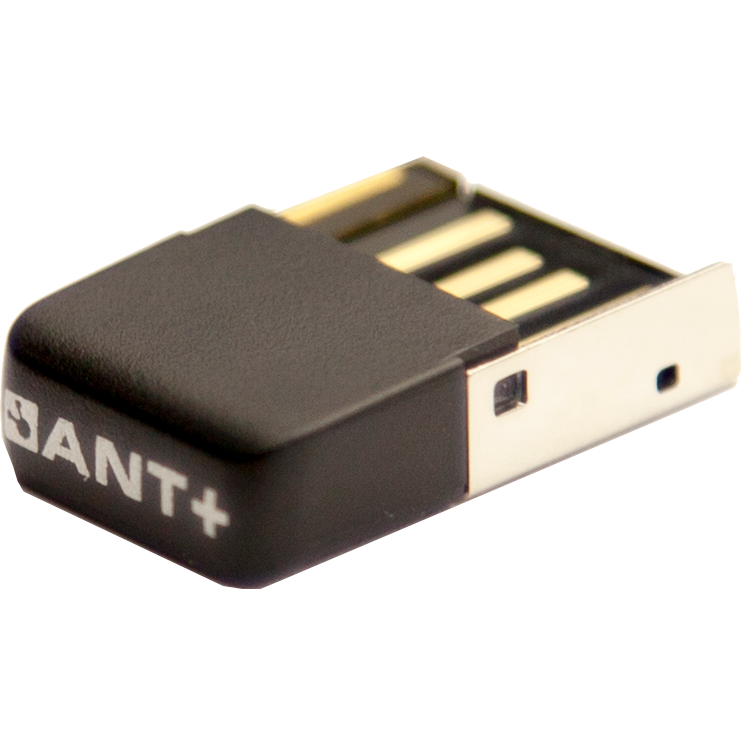 The python code for the conversion is here, it is a slight modification of one of the demos in this repository.

The order of starting is a bit tricky, in three different shells you start VLC, the speed monitor and a telnet session to connect the two:

There are very fancy programs and online options to make something like this work but they are all centered around simulating cycle trips and races and I can’t get myself to pretend I’m cycling outdoors when I’m indoors and it seems like a giant waste of time. Not that movies is much better but it does seem a bit more justifiable and the penalty for going slow is much more realistic than the penalty for cycling slow in a pretend trip or race.

So, instead of gamifying the real world trainifying entertainment. The same trick applies to all kinds of other fitness hardware, such as running machines and rowing machines. As long as you can find a part of the machine that you can attach one of those sensors to you’re good to go. Maybe a next version of this setup will include a generator on the rear wheel coupled to a bunch of fans to simulate a headwind.

Happy training. And stay away from Low Racers. If anybody is interested in a Zephyr…