One of my uncles cursed me with the LEGO bug, when I was 6 he gave me his collection because he was going to university. My uncle and I are relatively close in age, my dad was the eldest of 8 children and he is the youngest. So, for many years I did nothing but play with lego, build all kinds of machinery and in general had a great time until I discovered electronics and computers.

So, my bricks went to my brother, who in turn gave them back to my children when they were old enough and so on. By the time we reached 2015 this had become a nice collection, but nothing you’d need machinery for to sort it.

That changed. After a trip to lego land in Denmark I noticed how even adults buy lego in vast quantities, and at prices that were considerably higher than what you might expect for what is essentially bulk ABS. Even second hand lego isn’t cheap at all, it is sold by the part on specialized websites, and by the set, the kilo or the tub on ebay.

After doing some minimal research I noticed that sets do roughly 40 euros / Kg and that bulk lego is about 10, rare parts and lego technic go for 100’s of euros per kg. So, there exists a cottage industry of people that buy lego in bulk, buy new sets and then part this all out or sort it (manually) into more desirable and thus more valuable groupings.

I figured this would be a fun thing to get in on and to build an automated sorter. Not thinking too hard I put in some bids on large lots of lego on the local ebay subsidiary and went to bed. The next morning I woke up to a rather large number of emails congratulating me on having won almost every bid (lesson 1: if you win almost all bids you are bidding too high). This was both good and bad. It was bad because it was probably too expensive and it was also bad because it was rather more than I expected. It was good because this provided enough motivation to overcome my natural inertia to actually go and build something.

And so, the adventure started. In the middle of picking up the lots of lego my van got stolen so we had to make do with an elderly espace, one lot was so large it took 3 trips to pick it all up. By the time it was done a regular garage was stacked top-to-bottom with crates and boxes of lego. Sorting this manually was never going to work, some trial bits were sorted and by my reckoning it would take several life times to get that all organized.

Computer skills to the rescue! A first proof of concept was built of - what else - lego. This was hacked together with some python code and a bunch of hardware to handle the parts. After playing around with that for a while it appeared there were several basic problems that needed to be solved, some obvious, some not so obvious. A small collection:

fake parts needed to be filtered out

There is a lot of fake lego out there. The problem is that fake lego is worth next to nothing and if a fake part is found in a lot it devalues that lot tremendously because you now have to check each and every part to make sure you don’t accidentally pass on fake lego to a customer.

Lego is often assembled as a set and then put on display. That’s nice, but if the display location is in the sun then the parts will slowly discolor over time. White becomes yellow, blue becomes greenish, red and yellow fade and so on. This would be fairly easy to detect if it wasn’t for the fact that lego has a lot of colors and some of the actual colors are quite close to the faded ones.

Not all Lego is equally strong, and some parts are so prone to breakage it is actually quite rare to find them in one piece. If you don’t want to pass on damaged parts to customers you need to have some way of identifying them and picking them out of the parts stream.

Most Lego that was bought was clean, but there were some lots that looked as if someone had been using them as growth substrate for interesting biological experiments. Or to house birds…

feeding lego reliably from a hopper is surprisingly hard

Lego is normally assembled by childrens hands, but a bit of gravity and some moving machine parts will sometimes do an excellent job of partially assembling a car or some other object. This tendency is especially pronounced when it comes to building bridges, and I’ve yet to find a hopper configuration wide and deep enough that a random assortment of Lego could not form a pretty sturdy bridge across the span.

The current incarnation uses a slow belt to move parts from the hopper onto a much faster belt that moves parts past the camera. 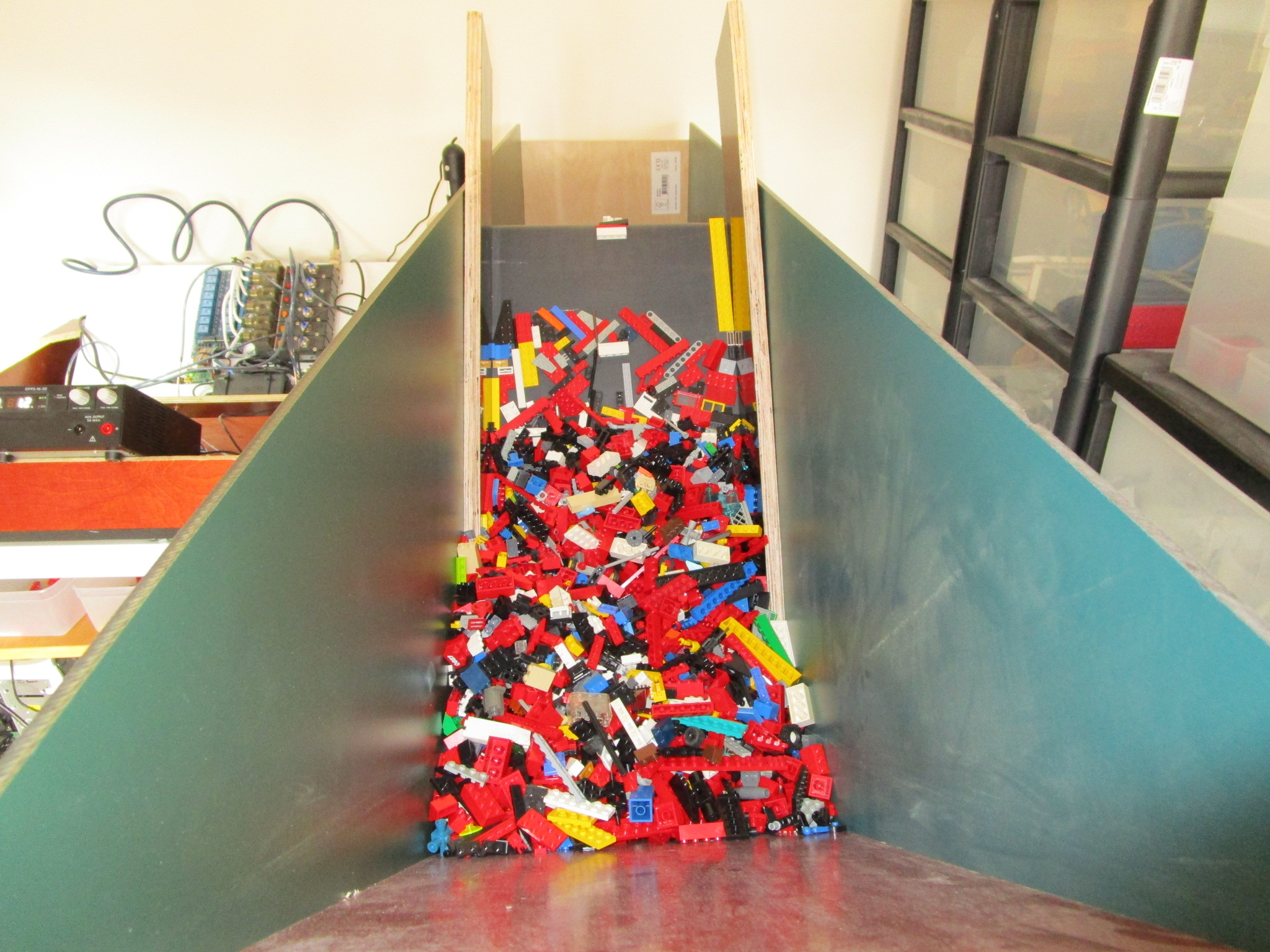 Scanning parts seems to be a trivial optical exercise, but there are all kinds of gotchas here. For instance, parts may be (much!) longer than what fits under the camera in one go, parts can have a color that is extremely close to the color of the background and you really need multiple views of the same part. This kept me busy for many weeks until I had a setup that actually worked. 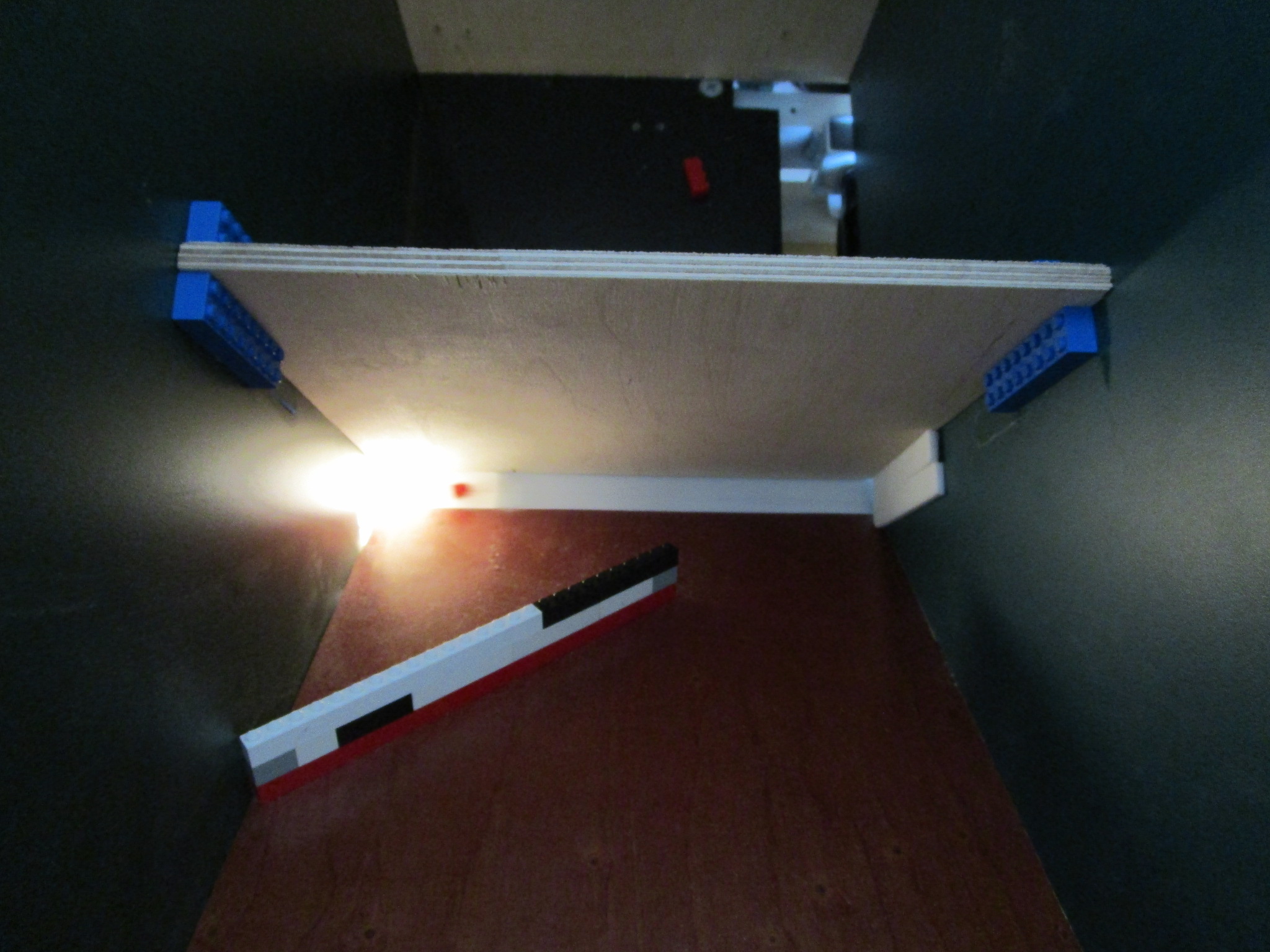 Once you can reliably feed your parts past the camera you have to make sense of what you’re looking at. There are 38000+ shapes and there are 100+ possible shades of color (you can roughly tell how old someone is by asking them what lego colors they remember from their youth). After messing around with carefully crafted feature detection, decision trees, bayesian classification and other tricks I’ve finally settled on training a neural net and using that to do the classification. It isn’t perfect but it is a lot easier than coding up features by hand, many lines of code, test cases and assorted maintenance headaches were replaced by a single classifier based on the VGG16 model but with some Lego specific tweaks and then trained on large numbers of images to get the error rate to something acceptable. The final result classifies a part in approximately 30 ms on a GTX1080ti Nvidia GPU. One epoch of training takes longer than I’m happy with but that only has to be done once. 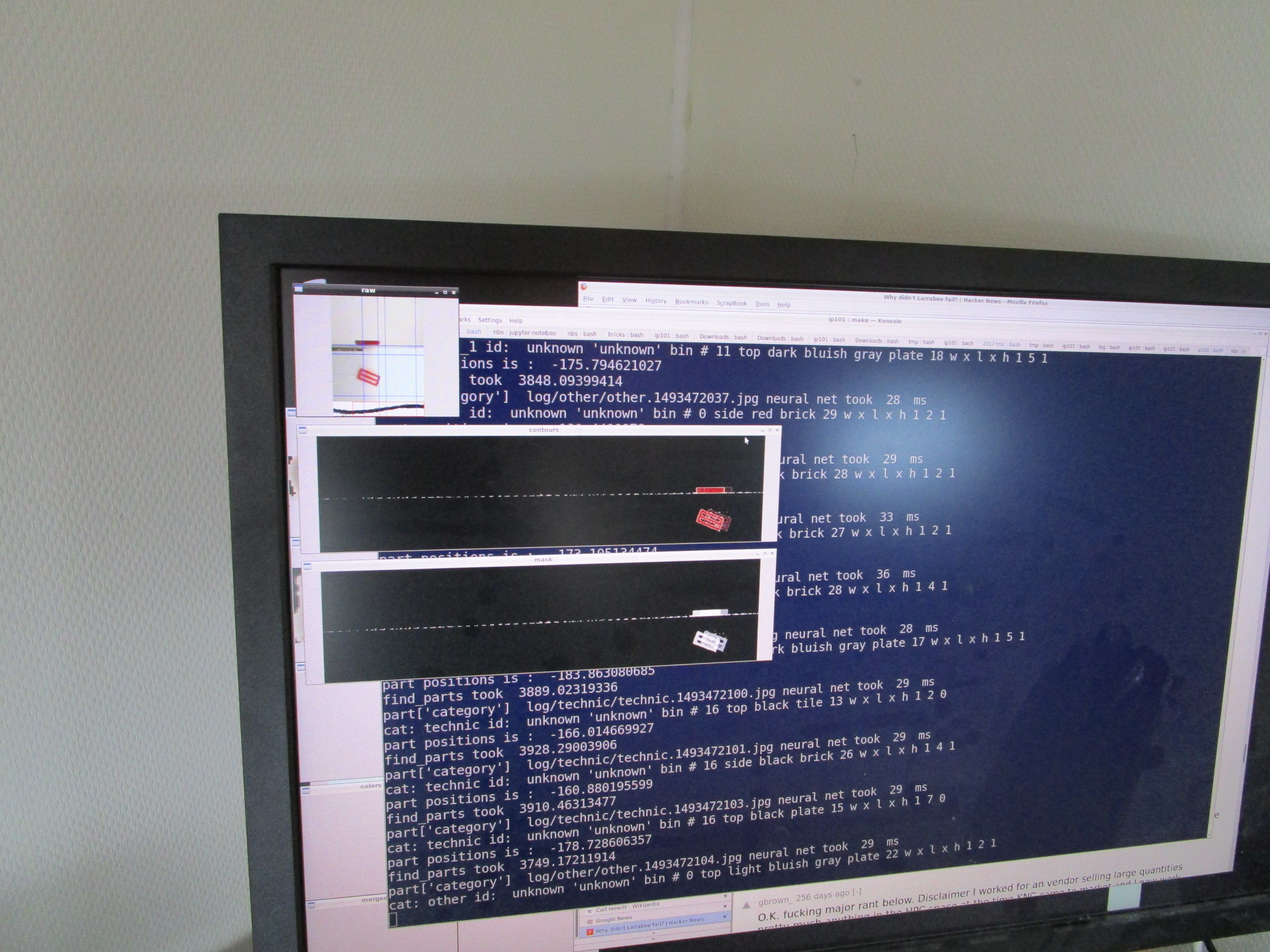 distributing parts to the right bin

This also was an interesting problem, after some experimenting with servos and all kinds of mechanical pushers the final solution here was to simply put a little nozzle next to the transport belt and to measure very precisely how long it takes to move a part from the scan position to the location of the nozzles. A well placed bin then catches the part. 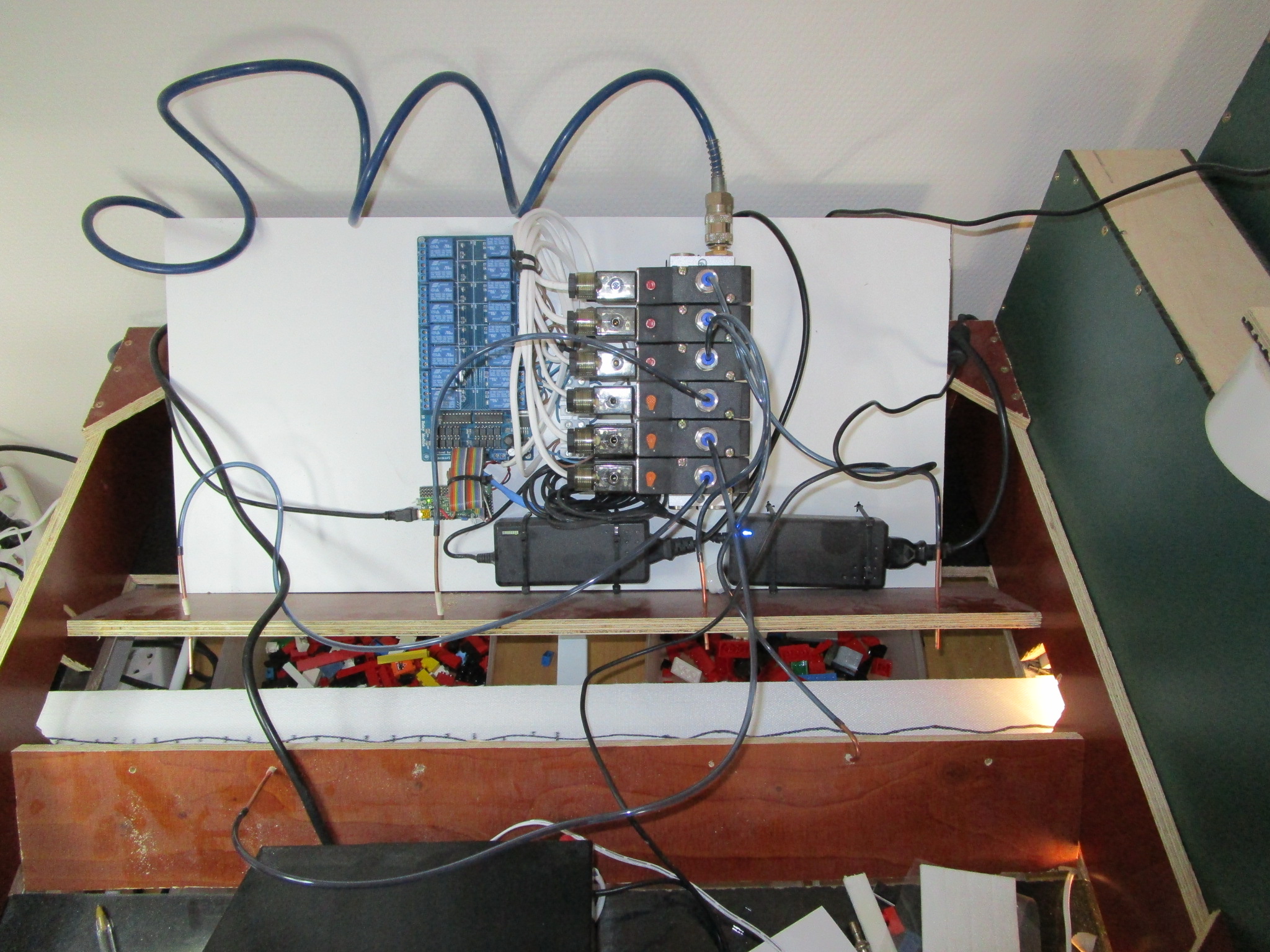 Building all this has been a ton of fun. As I wrote above the prototype was made from Lego, the current one is a hodge-podge of re-purposed industrial gear, copious quantities of crazy glue and a heavily modified home running trainer that provides the frame to attach all the bits and pieces to.

Note that this is by no means finished but it’s the first time that all the parts have come together and that it actually works well enough that you can push kilos of Lego through it without interruption. The hopper mechanism can still be improved a lot, there is an easy option to expand the size of the bins and there are still obvious improvements on the feeder. The whole thing runs very quiet, a large factor in that is that even though the system uses compressed air the compressor is not your regular hardware store machine but one that uses two freezer motors to very quietly fill up the reserve tank.

Here is a slow run tracking some parts so you can see how all the bits work together (it can run much faster):

A faster run, still slow enough that you can hopefully see what is going on: