Looking at the site earlier today I suddenly noticed a couple of links to sites that I would never ever think of endorsing through my blog.

A ‘what is this’ link explained that this was disqus’ way to thank me for using their comment system, a chunk of my webpage in between the comments section and the article body was claimed in order to attend visitors to my website to interesting content which they claim I ‘recommend’. I do no such thing. 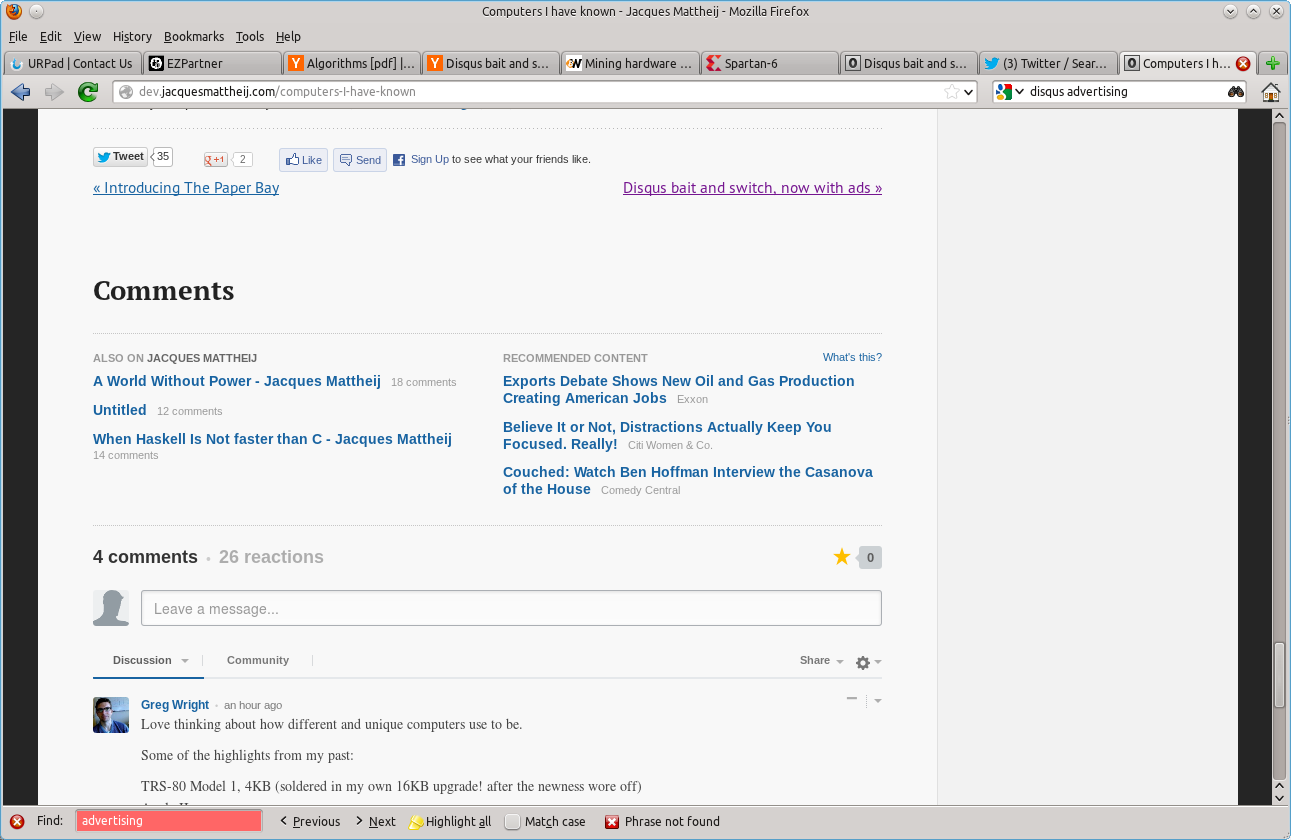 This is really not nice. Those links are indistinguishable from the links on the left hand side which are links inside the blog, so it doesn’t really stand out as an advertisement, it makes my site look stealthy and sneaky. IF I would place advertising on my site it would certainly stand out and be labelled as such. Stealthy advertising is one of the least nice ways of advertising on a site, the end user will think that such advertising is an endorsement by the site owner rather than a paid spot, and the word recommended increases that perception.

Apparently somewhere in December disqus decided that they could pull this stunt without an active alert to the website owners that use the disqus plug-in. There is a degree of trust between a SAAS or plug-in provider and the user that the offering will not be changed in important ways without active notification, and that changes will default to ‘off’. That’s called grandfathering and it is one way in which you can show those users that helped you to grow that you appreciate the relationship.

The fact that disqus holds on to the comments is a sign that I trust them to do the right thing with my data, I absolutely never expected them to suddenly claim a chunk of my pages for advertising purposes, especially without notifying me first. That I am apparently entitled to a share of the take makes no diffence to me, if I want advertising on my blog I will put it there myself, and if I decide to endorse another website by linking to it that is my decision, not theirs. I do not ‘recommend’ any of these links and I don’t think I need to be surprised by finding out that I apparently endorse a bunch of companies.

Naming this euphemistically a ‘discovery’ feature doesn’t do much either, it’s advertising, so call it advertising, calling it a recommendation and making it blend in is illegal in lots of places, and even if it isn’t illegal it is not what you should do. Advertising should be clearly labeled as such, and it should stand apart from the content of a site.

So, bye-bye disqus, no more comments on my blog.

postscript: some people claim that the blog owners themselves do not see the ads, I am currently not logged in to disqus and not at my normal location so maybe that is why I suddenly saw the ads where there were none before (including yesterday). If that is true it is a lot nastier than I already thought it was.